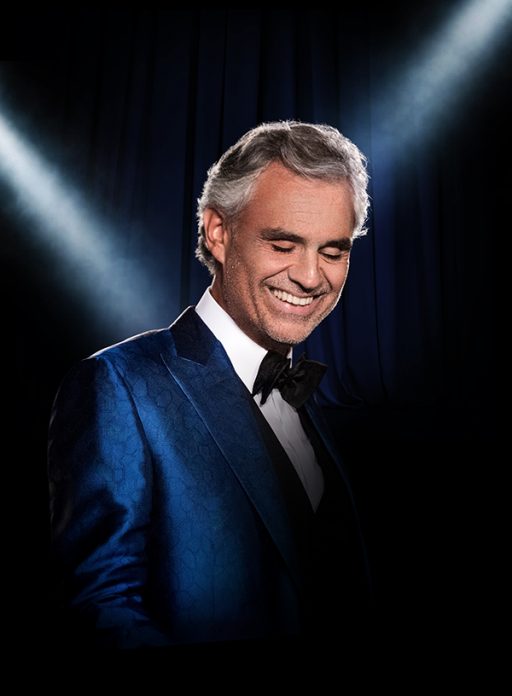 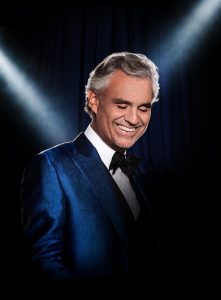 Proclaimed around the world as the Icon of the highest Italian vocal tradition, to date Andrea Bocelli has sold over 90 million records. He improved his singing skills with his mentor Franco Corelli, and initially became widely famous for winning the Italian Song Festival of Sanremo Contest in 1994. Meanwhile he started his dazzling classical career, performing on stage – with the prestigious conductors Lorin Maazel, Seiji Ozawa, Zubin Mehta – the masterpieces of the Opera repertoire. Amongst the latest recordings, the Manon Lescaut  conducted by Plácido Domingo, the Turandot and – in 2016 the release of the Aida conducted by Zubin Mehta. In 2017 Bocelli recorded La forza del destino and in 2018 he will record – and interpret in theater – Lucia di Lammermoor.

The record-breaking Artist of concerts in front of huge crowds has won it all in the Record industry. Amongst the countless acknowledgments, in 2010 he was honored with a Star on the Hollywood Walk of Fame. In his career Andrea Bocelli has received 5 nominations at the Grammy Awards e 6 nominations at the Latin Grammy Awards. He performed for four Presidents of the United States of America, three Popes, many Prime Ministers and also at ceremonies of the Olympic Games, at the Worldwide Expo in Shanghai in 2010 and in 2015 at the Worldwide Milan Expo (together with the Orchestra of the Teatro alla Scala).

In 2015 his 15th studio album Cinema was released in 75 countries, while in 2016 a 20th Anniversary Edition of Romanza was released, a special remastered edition containing some bonus tracks.

In the Fall 2017 the movie “La musica del silenzio” – taken from the autobiographical novel of the same title, written by Bocelli himself – achieved a resounding success among the general public and gained critical acclaim. The movie, directed by Michael Radford, featured actors like Antonio Banderas and Toby Sebastian.

In the Holiday Season 2017 Perfect Symphony was released, a new edition of the famous song by Ed Sheeran (certified 12 times Platinum and 8 times Gold) in which the author sings together with Andrea Bocelli. The fresh duet, with a big orchestra arrangement, has been overwhelmingly successful since the very beginning.

Andrea was honored by the Italian State with a Grande Ufficiale Italian Order of Merit (Grand Officer of the Italian Republic) and he was bestowed with the title of Ambassador of the Italian Republic in San Marino. He earned a Bachelor’s degree in Opera Singing from the Conservatorio di Musica “G. Puccini” in La Spezia and a Bachelor’s degree in Law from the University of Pisa, Italy. During the Opening Ceremony of the World Economic Forum 2015 in Davos (Switzerland), he was honored with the Crystal Award, the prestigious recognition to his person as an artist, as a man, as a philanthropist. In 2016 the University of Macerata bestowed him with the Honorary Degree in Modern Philology.

In 2011 he founded the Andrea Bocelli Foundation (ABF) with the aim of enhancing the wealth of relationships and the trust bond that he has been able to establish wherever he goes around the world, where he is inevitably considered a musical and ethical point of reference.

As part of his commitments in favor of solidarity, on September 8th 2018 the Tuscan Tenor held an extraordinary and memorable concert inside the Colosseum in Rome, together with many celebrity artists, amongst whom Elton John, Steve Tyler and Sumi Jo.

Due to the persistent state of emergency and in compliance with the latest government provisions (Law Decree n.33 of 16 May 2020), our two major live events scheduled at the Teatro del Silenzio in Lajatico on July 24th and 26th, have been postponed to 2021. The concerts are not canceled but only postponed.

The 15th edition of the Teatro del Silenzio, the exclusive event that takes place every year on the native hills of Andrea Bocelli, in Lajatico, scheduled for July 24th and 26th 2020 – the Mystery of Beauty -, will be postponed to July 22nd and 24th 2021. On this occasion, the superb Tuscan skyline with its rolling hills, will be more than ever the protagonist of a ‘one in a lifetime event’ which will see the beauty of nature blend with the experience of lyrical music, making it a memorable journey alongside the great tenor and many of his friends and colleagues. The tickets purchased for the shows on the 24th and 26th of July 2020 remain valid for the shows of the 22nd and 24th of July 2021. It will be possible to resell the tickets using the Vivaticket platform which will be activated as soon as possible, we will inform all our clients as soon as it will be online.